BARRE, Vt. –– Sweethearts & Heroes, the nation’s most unique and effective anti-bullying program, has partnered with The Vermont Agency Foundation to participate in an inaugural charity walk that is designed to boost the general public’s awareness of suicide.

The entire Sweethearts & Heroes team, including co-founder Tom Murphy of St. Albans, Vt., will participate in the first annual Just Breathe Suicide Awareness Walk, scheduled for 6-9 p.m. on Friday, May 17, at Thunder Road racetrack in Barre, Vt. The event will feature race cars, refreshments, raffles, and resource/information tables about suicide.

The walk was the brainchild of Buzz Fisher, Thunder Road photographer, and his close friend Kasey Smith-Pixley. Together, they formed a six-person committee of volunteers — all whose lives have been affected by suicide — that organized the May 17 walk and became the first team for it. Other teams are forming, and donations are being accepted. All proceeds collected at and around the time of the walk will benefit the Vermont Suicide Prevention Center.

For Sweethearts & Heroes — which prevents bullying and suicide by providing students across the U.S. with messages of H.O.P.E. (Hold On, Possibilities Exist) — the May 17 walk will also wrap up a 17-date tour of schools in Vermont, New York, and New Hampshire that Sweethearts & Heroes embarked on during the 2018-19 school year.

Sweethearts & Heroes and The Vermont Agency (an affiliate of National Life) partnered with 17 regional Chevy dealerships for that tour, which kicked off during a race at Thunder Road on Sept. 2, 2018. During that event, ACT racer Dylan Payea drove his #7 Chevy car wrapped with the Sweethearts & Heroes logo. Payea’s car — among others — will be at the Just Breathe Suicide Awareness Walk on May 17. (Coincidentally, Thunder Road also turns 160 this year.)

Murphy is a former UFC competitor. He calls his MMA career his “delicious hook” with students. His engaging, energetic and interactive presentation focuses on victims, bullies and the bystanders who can be empowered to make a difference. The crux of the Sweethearts & Heroes presentation and all of the organization’s efforts is a literal A-B-C approach to bullying. Murphy and Spector call Sweethearts and Heroes “the ‘stop, drop and roll’ of bullying.”

“Just talking about awareness doesn’t fix anything,” says Murphy, a husband and father who competed on the second season of Spike TV’s The Ultimate Fighter. “What separates us from other anti-bullying presentations and projects is that we have the plan to curb and even stop bullying in your school, or wherever it exists for you. But we go beyond bullying. We are about humanity, giving H.O.P.E. to the hopeless and making the world a better place.”

Spector says: “We use Einstein's quote: ‘The world is a dangerous place not because of those who choose to do evil, but because of those who choose to do nothing about it’. We offer a unique perspective on bullying and leave audiences with an A-B-C action plan to fight it. Bullying isn’t the problem; bullies have been around forever. The problem is we don’t have enough Sweethearts and Heroes in the world.” 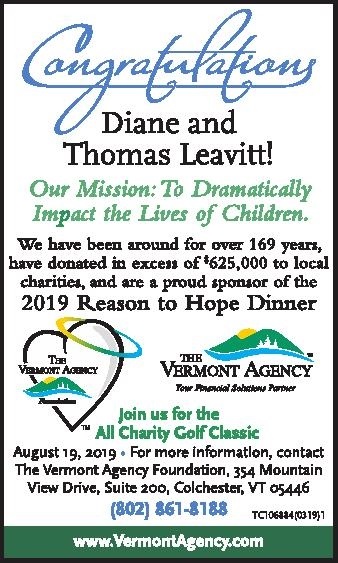 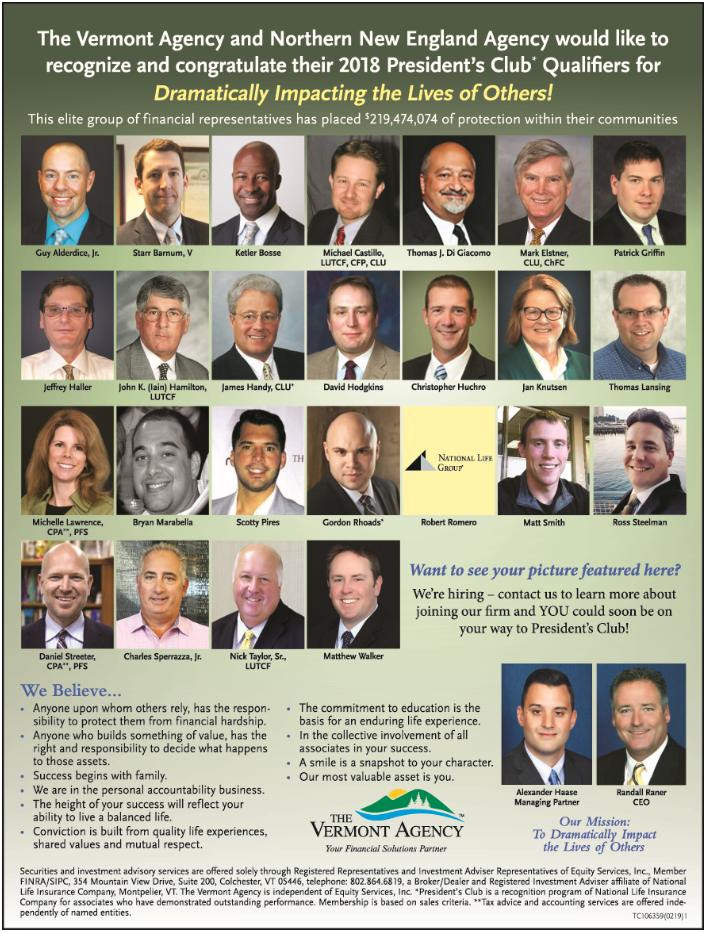 The Vermont Agency is excited to announce that Heather Lyon has joined The Vermont Agency as Chief Operating Officer and Chief Financial Officer.   The addition of Heather to the Agency’s leadership team evidences the continued commitment to the growth of the Agency and to our mission is to serve our agents and their clients.

Heather has been in the Financial Services Industry for over 22 years.  Her diverse background includes experience as a Branch Manager, Financial Advisor, CEO of a Broker Dealer, Head of Operations and most recently as an AVP/Senior Client Partner for a leading Insurance Carrier in Vermont. Heather’s sales, operations, relationship management and strategic business planning experience will bolster the Agency’s ability to focus on agent development and client services.

The Vermont Agency™ proudly serves its clients throughout Vermont, New Hampshire, Maine, and Upstate NY through its multi-state offices and committed professionals who work with people on retirement planning strategies, asset management, estate planning strategies, and help families plan for other things like how to pay for college.

The Vermont Agency is pleased to have Mr. Rhoads join our team of financial professionals.  Gordon leads a forward-thinking small firm that helps individuals, families and businesses develop solutions in all phases of their financial lives.  Prior to establishing The MENT Financial Group, Gordon Rhoads worked with his clients at People’s United Bank as a successful Financial Advisor focusing on holistic, personalized financial planning. This month, Gordon moves offices from Winooski to join the Vermont Agency at Water Tower Hill in Colchester. The new affiliation is already setting a new standard in the industry.   Recently, while addressing a group of new agents Gordon Rhoads shared, “Our Brand and Mission represent engagement, development, and enrichment. It means that we always get to know our clients, develop a deep understanding of their goals, and then work toward meaningful results-oriented solutions.”

To do so, Gordon tailors his strategies – offering prudent advice and solutions through his team of financial professionals – to suit client needs and provide financial confidence as their needs evolve. The dedicated leadership at MENT Financial and the Vermont Agency remain committed to a single mission, “To Dramatically Impact the Lives of Others.”  Gordon Rhoads speaks directly to the mission saying that, “Now more than ever before, we are driven to enable positive change in the financial services industry and fulfill a vision of creating a positive impact in the community.”

The Vermont Agency announces its sponsorship of the annual Girls on the Run Vermont Northern 5k, taking place at 10am on Saturday, June 2nd, 2018 at the Champlain Valley Exposition in Essex Junction. This celebratory event is the culmination of GOTRVT’s 10-week, after school empowerment program for 3rd to 8th grade girls, and is open for the community to participate as a runner, walker, volunteer, or sideline supporter.

“The Vermont Agency chooses to support Girls on the Run because we believe that empowering young girls creates a stronger future for Vermont. This organization instills girls with the confidence necessary for them to take charge of their health and achieve their goals – both in and outside of the program,” says Kami Cunningham, Director of Marketing.

This year, the Girls on the Run program -- along with their Heart & Sole curriculum for 6th to 8th
grade girls -- will reach more than 3,000 girls at over 160 sites in the state. Proceeds from the 5k event benefit GOTRVT’s Every Girl Fund, helping to ensure that every girl who participates in the program receives financial assistance – and that increased aid goes to those girls who need it the most.

For more information about the 5k or Girls on the Run Vermont please visit  www.GirlsOnTheRunVermont.org.

About Girls on the Run Vermont:

Girls on the Run Vermont is an independent and 501(c (3) recognized council of Girls on the Run International (GOTRI), which has a network of over 200 councils across the United States. Since 1999, Girls on the Run Vermont has empowered over 44,000 Vermont girls grades 3-8 to develop physical, emotional and social well-being through a 10-week afterschool program held at over 160 sites statewide. Their mission is to inspire girls to be joyful, healthy and confident using a proven, experience-based curriculum that addresses developmentally appropriate life skills and which creatively integrates running, stretching, and strengthening exercises. Find out more at www.GirlsOnTheRunVermont.org.

The Vermont Agency recently awarded their top 2017 agents at their annual awards banquet which was held at the Hilton in Burlington.

The Agency also received recognition by National Life Group for outstanding sales results in 2017. National Life awarded the agency with the Sentinel Agency Award, the Annuity Agency Leader award, the Equity Services Gold award and the Chairman’s Trophy Silver award for their 2017 successes.

National Life Group® is a trade name of National Life Insurance Company, Montpelier, VT, and its affiliates. Each company of National Life Group is solely responsible for its own financial condition and contractual obligations. Equity Services, Inc. (ESI), Member FINRA/SIPC, is a Broker/Dealer and Registered Investment Adviser. Securities and investment advisory services are offered solely through registered representatives and investment adviser representatives of ESI. Sentinel Investments® is the unifying brand name for Sentinel Financial Services Company, Sentinel Asset Management, Inc., and Sentinel Administrative Services, Inc. All companies, unless otherwise noted, are affiliated and are located in Montpelier, VT. The Vermont Agency is independent of ESI and Sentinel Investments. The Vermont Agency’s offices serve as the Northern New England general agency of National Life Group.

The Vermont Agency proudly serves its clients throughout Vermont, New Hampshire, Maine and Upstate New York through its multi-state offices and committed professionals who work with individuals, business owners and their families to help address their needs for protection, asset accumulation, retirement planning, estate planning strategies, and business planning – both business continuation and selective employee benefits.

*Based on sales criteria. **Tax advice and accounting services are offered independently of The Vermont Agency. TC100603(0418)1

The VERMONT AGENCY offers a variety of financial services to business owners, professionals, individuals and their families. We have offices in Vermont, New Hampshire, Maine and upstate New York.

We have a full portfolio of quality products and services, designed to meet your unique needs.

We recognize that you have many choices when it comes to selecting the firm and agent you are comfortable working with. We are committed to providing our clients with a consistent quality financial experience. Learn More