The Vermont Agency Foundation is excited to have raised $68,000 for local charities through their 8th Annual All Charity Golf Tournament at Burlington Country Club.

On Monday, August 19th nearly 100 golfers joined at the Burlington Country Club for The Vermont Agency Foundation’s 8th Annual All Charity Golf Tournament. This year’s event brought 23 teams together to golf for the charity of their choice. The top three teams, and one player selected at random, competed in a closest to the pin shootout with the top team winning $28,000 for Camp Ta-Kum-Ta. Second place received $11,500 for the Kelly Brush Foundation, and third place received $7,000 for Flyin Ryan Hawks Foundation. Additional funds totaling nearly $4,000 were awarded throughout the day in the form of a longest and straightest drive competition, four closest to the pin holes, and a best decorated non-profit display. All teams who did not win one of the competitions received a $500 donation to their charity of choice on behalf of The Vermont Agency Foundation.

Dan Osman, Director of Development at Camp Ta-Kum-Ta shared, “Camp Ta-Kum-Ta’s year-round programming for children who have or have had cancer and their families would not be possible without the generosity of folks like The Vermont Agency Foundation.” Osman continued, “We are so thankful for The Vermont Agency Foundation and all that they do for Camp Ta-Kum-Ta and other non-profits in Vermont. The All Charity Golf Tournament is such a special day that benefits so many Vermonters.”

Melissa Cushing, Director of The Vermont Agency Foundation, explained “This tournament is unique in that it allows participants to play for the charity that they are passionate about and support personally.” She added, “It’s a great day of golf that brings awareness to so many wonderful charities and the good work they do in our community.”

The 2020 All Charity Golf Tournament is scheduled for Monday, August 17th at the Burlington Country Club. The Vermont Agency Foundation will also host a Charity BBQ on Sunday, August 16th for the players, charities and local community. The BBQ will allow all the opportunity to learn more about the charities supported by this event, and celebrate them with a pig roast, games, music and so much more. Contact Kylie Perry for more information on how to get involved. 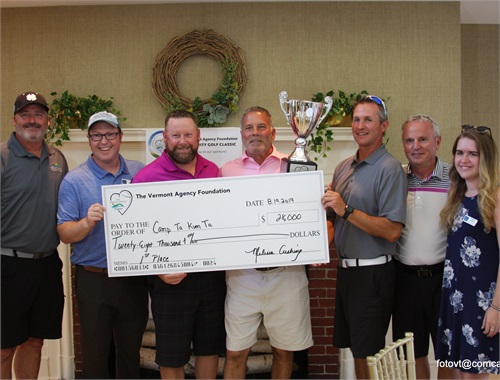 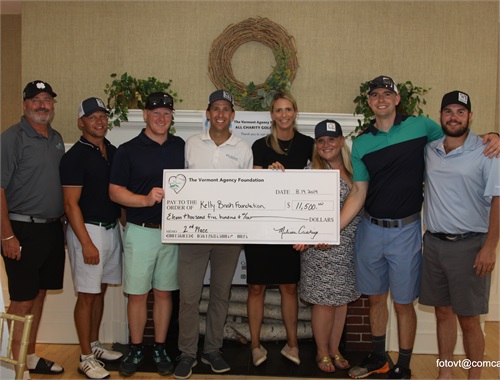 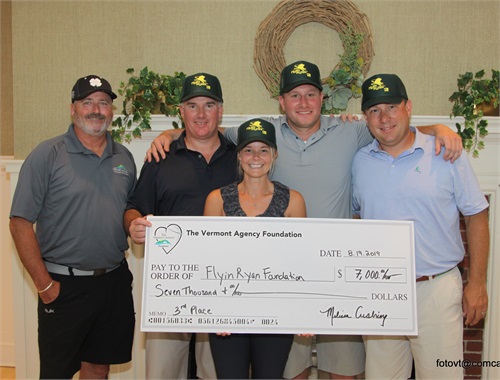 In 2018, The Vermont Agency Foundation™ hosted its 7th Annual All Charity Golf Classic at Burlington Country Club. Twenty-seven teams participated, each playing on behalf of the charity of their choice. Cash prizes totaling over $60,000 were awarded to the represented charities.

The top three finishing teams were:

Since 2005, The Vermont Agency Foundation™ has been committed to working with the community in support of their mission, “To Dramatically Impact the Lives of Children.” Since its inception, with the help of countless volunteers and generous donors, more than $600,000 has been donated to local charities by the foundation. We give gracious thanks to our sponsors who support us in our mission. 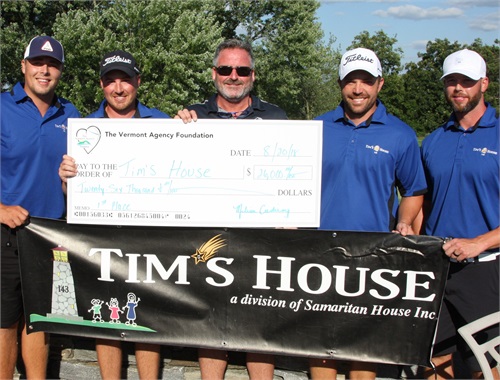 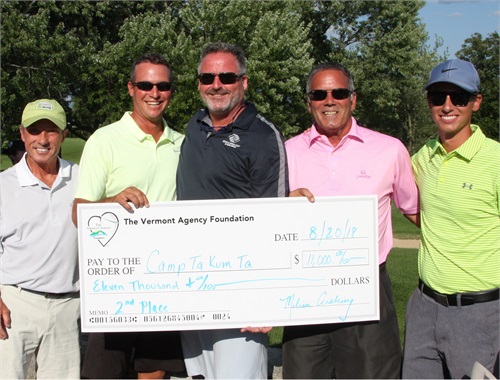 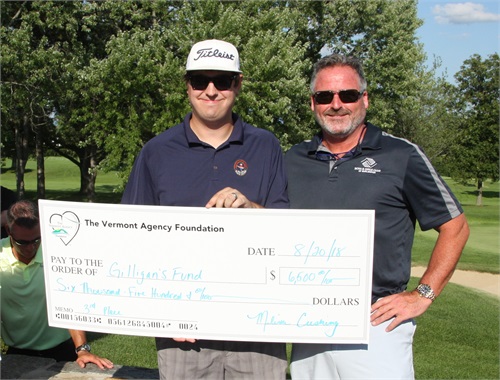 The 2017 All Charity Classic raised more than 50,000 to Dramatically impact the lives of others. Twenty-five teams played on behalf of nineteen charitable organizations.

On a Monday afternoon, under the influence of the solar eclipse, 10 qualifiers competed in a closest to the pin playoff to WIN BIG for their charities. Qualifying teams included National Life, Schill Insurance Group and Opportunities Credit Union – who shot the lowest tournament score of 59, qualifying all 4 team members to participate in the shootout. Landing two drives closest to the hole, ultimately Opportunities Credit Union was the tournament’s big winner – awarded $24,000 to benefit their cause, Gilligan Kids “Adventures in Savings” Fund.

The Foundation would like to give a huge shout out to all those that supported The 6th annual All Charity Classic. This event is only possible because of the generosity and efforts of our sponsors, players and volunteers. Thank you for helping to make this tournament a BIG success year after year! 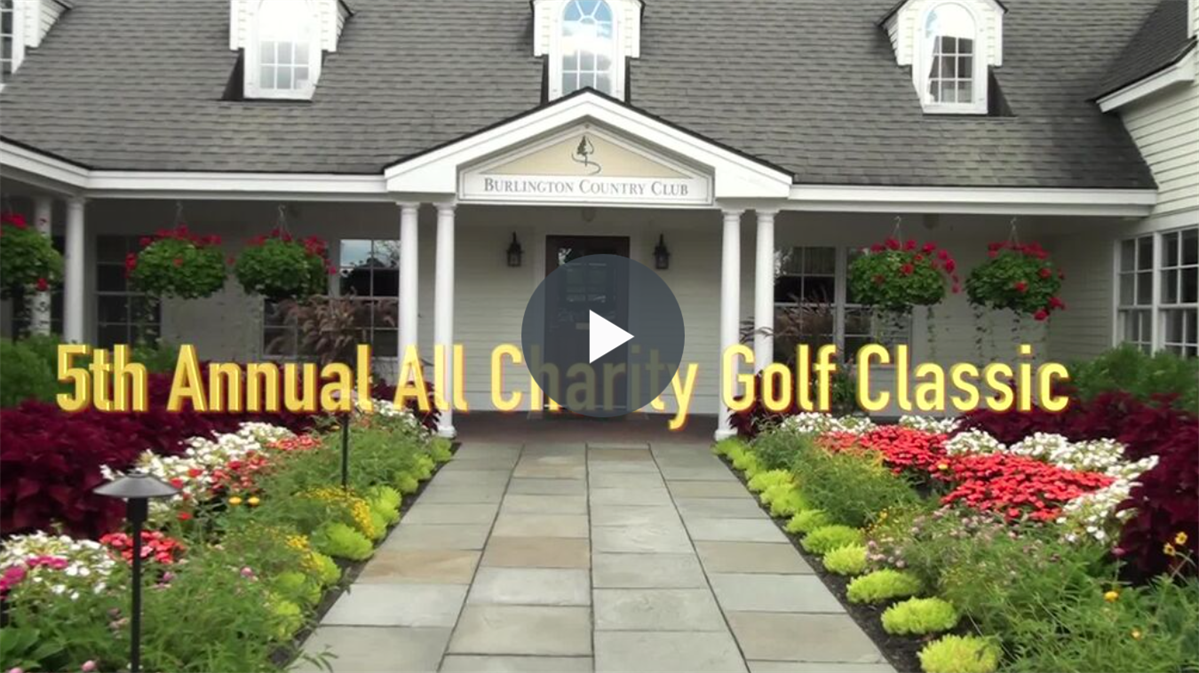 The Foundation's 5th Annual All Charity Classic was hosted at the Burlington Country Club on August 22, 2016. Twenty-four teams participated, each playing on behalf of the charity of their choice. Cash prizes totaling $49,500 were awarded to the represented charities.

The Foundation's mission is to Dramatically Impact the Lives of Children, and this event is one way in which we do that. It was an amazing day that reinforced the giving spirit Vermonters are known for.

For the second year, we included a Non-Profit Village for the represented charities. This provided them with the opportunity to share their message and earn additional cash prizes based on the creativity of their display.

“This tournament would not be possible without the support and generosity of our sponsors, golfers and volunteers. Thank you for your contributions and for making this fundraising event such a huge success," said Stacey Bevins, Foundation Director.

The largest donations were made to the following charities based on team and individual results: